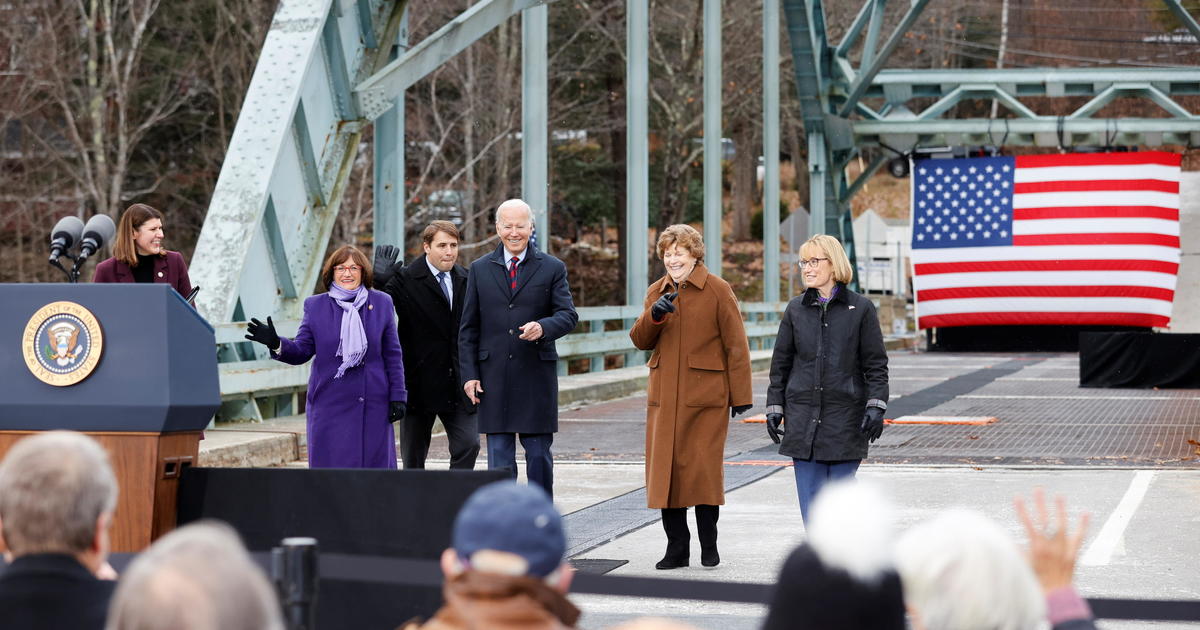 Washington — President Biden is in New Hampshire Tuesday to kick off a two-state, two-day swing after signing the $1.2 trillion bipartisan infrastructure bill into law.

The president is speaking from the Pemigewasset River Bridge, which is on the state’s “red list” of bridges requiring inspections twice a year due to poor conditions. The president began his remarks by thanking key lawmakers who made the legislation a reality. He particularly praised Senator Maggie Hassan, saying she did a “hell of a job.”

“My message to the people in New Hampshire is simple, it’s this — because of this delegation, New Hampshire and America are moving again. Your life is going to change for the better, and that’s literal,” the president said.

New Hampshire is estimated to receive $1.1 billion for federal-aid highways and $225 million for bridges through the infrastructure law, according to the White House. It will be largely up to the state to determine how to prioritize projects.

In New Hampshire, the president also touted the Build Back Better Act, which the House could vote on later this week. He said he’s confident the legislation will pass the House and Senate.

Following his visit to New Hampshire, Mr. Biden is scheduled to travel to Detroit, Michigan, on Wednesday to visit a General Motors’ electric vehicle assembly plant.

The signing of the bipartisan infrastructure bill Monday cemented a crucial legislative victory for the White House, with Mr. Biden delivering on an issue that has evaded several of his most recent predecessors.

Congress sent the $1.2 trillion bill to his desk earlier this month after its passage by the House. The measure includes $550 billion in new spending and represents the most significant investment in the nation’s physical infrastructure in years. It provides $110 billion for roads, bridges and major projects, $39 billion for public transit and $66 billion for railways, and directs $65 billion for expanding broadband and $55 billion for clean water investments. The law also allocates $7.5 billion to build electronic vehicle charging stations.