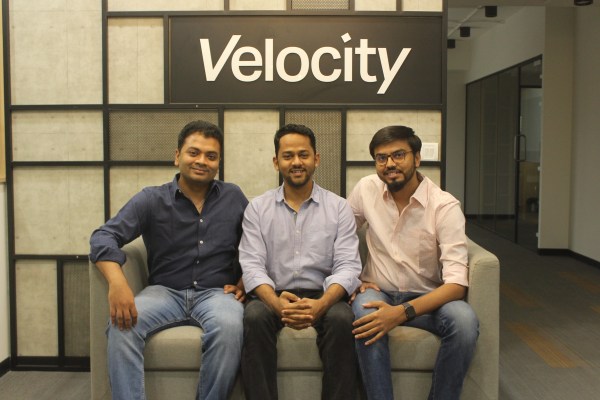 Peter Thiel’s Valar Ventures has doubled down its bet on Velocity, which operates a revenue-based financing platform for e-commerce and direct-to-consumer businesses in India, just months after it first backed the Bangalore-based startup.

The one-and-half-year-old Velocity said on Wednesday it has raised $20 million in its Series A financing round. Valar Ventures, which led Velocity’s seed round earlier this year, led the Series A as well, the two said Wednesday. Presight Capital, AngelList India head Utsav Somani’s iSeed, Maninder Gulati of Oyo, Zac Prince of BlockFi and Philippe De Mota of Hedosophia also participated in the round, which takes the startup’s all-time raise to $30 million.

Velocity is attempting to build a reliable alternative to venture capital and traditional bank debt for e-commerce and direct-to-consumer brands in India. Rather than charging an interest on the loans it sanctions, Velocity takes a low standard fee and businesses pay it back based on their revenue.

Abhiroop Medhekar, co-founder and chief executive of Velocity, told TechCrunch in an interview last week that the duration of the payback period varies based on the revenue a business generates.

“In case the partner firm’s revenue ends up growing, it benefits us because the duration of the loan payback time is shorter. In case the revenue falls, then we also take that risk along with the business. We are saying it’s perfectly fine for them to take longer if the business is not doing as well,” he said.

Velocity integrates its platform with the partner firm’s vendors and is able to tell how the business is doing. The startup uses over 50 parameters to assess whether it can provide a loan to a business, and credits the amount within 5 days.

Direct-to-consumer and e-commerce businesses, both of which are capital intensive initiatives, typically need to raise large amounts of capital to run their operations. Until recently, the firms either relied on regular lenders or venture firms for financing, but the nature of their business has made both such options not as viable. According to a recent estimate, less than 0.5% of over 75,000 independent e-commerce stores on platforms such as WooCommerce and Shopify in India were equity funded.

When Velocity partners with a business, “it also has a skin in the game. And that is why we see so many repeat customers. 78% of businesses that have worked with us come back to take more loans from us in the future,” said Medhekar.

Citing its own figures, Velocity said that the brands that have historically raised capital through Velocity grew their revenues by 1.5 times within six months of funding. Some of its customers include PowerGummies, Green Soul, WallMantra, BellaVita, Smoor Chocolates and CrossBeats.

Velocity has amassed 175 customers and made a total of about 250 investments to date.

Medhekar, who previously worked as an investor at Elevation Capital, said integrations into several vendors and systems gives Velocity full visibility into the financials of how its partner businesses are doing. To his surprise, he said, even the founders of those firms didn’t have such clarity.

“As a founder, my data is scattered across Amazon, Shopify, Facebook, Google and other services and I may not be able to compile them all to draw any insight,” he said.

To tackle this, Velocity recently launched a free product called Velocity Insight that helps its partner businesses get a daily report delivered to them on WhatsApp each morning. “It’s in our best interest that our partners also grow. We found that these actionable insights are helping the businesses inform their decisions,” he said.

The product has made inroads with many businesses in recent months and many non-customers are also signing up to the platform to receive insights, the startup said. Velocity may introduce a paid service for its non-customers and it is looking to broaden its insight offerings by adding more metrics and benchmarks, said Medhekar.

Velocity itself has grown 10 times in recent months, said Andrew McCormack of Valar Ventures. “Despite this exponential growth, their portfolio quality remains strong. We were impressed by their strong customer orientation, tech-product DNA, and ambitious growth plans. We are excited to support their bold vision of empowering thousands of entrepreneurs in India,” he said.

The startup, which partners with NBFCs to finance loans, said it aims to deploy over $134 million to over 1,000 e-commerce and direct-to-consumer businesses in the next one year. “Our long-term vision is to empower new-age businesses through multiple financing products. The reason we started with revenue-based financing is because we felt the access to financing is the biggest gap for them. As we spend more time, we have identified several more areas in which we wish to expand,” said Medhekar.

Divij Bajaj, Founder of PowerGummies, a customer of Velocity, said, “we chose to raise capital through Velocity because of their speed and convenience. We were able to securely connect our online sales and marketing data with Velocity’s platform within a few clicks and got funded within a week. Their terms were better than other alternatives and we got to retain our equity in a growing business.”

A New Refrain From Artists: We ‘Almost Gave Up on Instagram’