The Legacy of Mattress Cash Fires 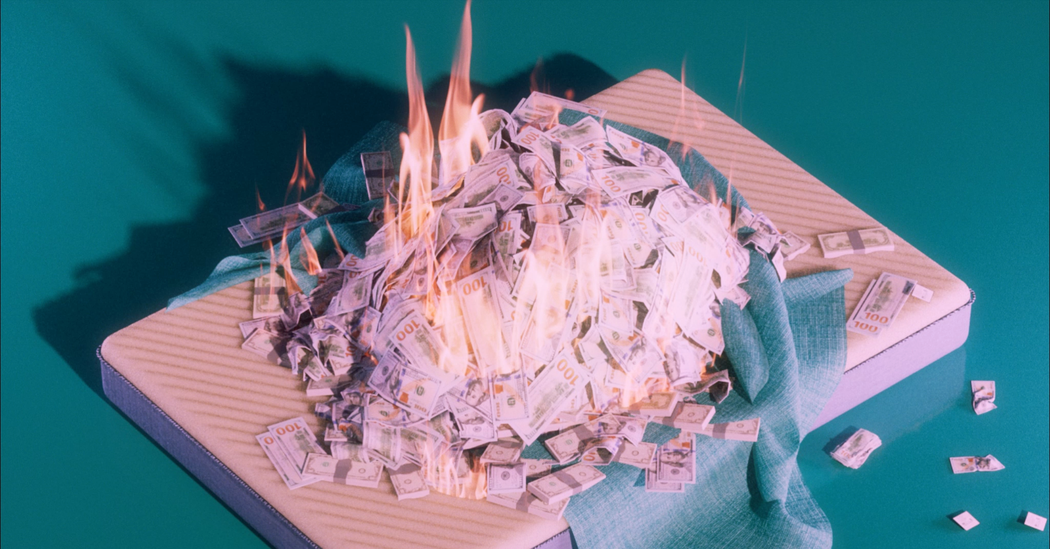 This article is part of the On Tech newsletter. Here is a collection of past columns.

I’ve been having deep thoughts this week. About mattresses and movie tickets.

Technologists are fixated these days on a potential future of blockchains and metaverses or on spending millions for a copy of the U.S. Constitution because … democracy? But before we move on to the next chapter in technology, let’s consider both the good and ugly in the current one.

On my good days, I believe that the silliness in Silicon Valley and the harms from some uses of technology are far outweighed by the benefits of innovation and optimists who dream outlandishly big. I’m glad that entrepreneurs are working to make cars safer and better for the planet, and I can’t imagine life without a supercomputer in my pocket.

At this moment, though, I’m feeling pessimistic.

Part of the recent legacy of tech is a generation of young companies that have contributed (arguably) clever ideas, but nonetheless become financial zombies. Many have ingrained unhealthy consumer expectations and lost bucketfuls of money.

I wonder if anyone involved in the 2010s tech era has misgivings about these downsides or learned any lessons from them. I hope so, but fear not.

Casper popularized buying online mattresses that are crammed into boxes and delivered to homes. This week, the company reached an agreement to sell the business for a fraction of its former value.

Circumstances might have been different for Casper without the coronavirus pandemic and the freeze in moving goods around the world. But the sale was also a sign that investors didn’t have faith in Casper’s future.

The company — like Uber, WeWork, DoorDash and many other start-ups that were emblematic of the 2010s — has been losing oodles of money after years in business. Casper also disclosed this week that it was at risk of running out of cash within a year, although the company said that the sale, along with loans, planned cost cutting and other steps, should help it stay afloat.

Also in the last few days, one the weirdest crazes of recent years looked poised for a comeback. MoviePass was thrilling to the people who paid what was initially $10 a month for the chance to watch a movie every day in theaters. It felt like an impossible deal — and it was.

MoviePass lost an unfathomable amount of money, and its parent company filed for bankruptcy nearly two years ago. Now, one of MoviePass’s founders has a plan to resurrect it after acquiring it out of bankruptcy. We’ll see what happens.

Besides the red ink, what connects Casper and MoviePass — along with Warby Parker, Opendoor and many other start-ups of the last decade — is a willingness to reimagine old ways of selling products or services. Even if we never bought what these companies sold, they made stodgy industries change and opened people’s eyes to new possibilities.

It’s worth celebrating the good they have done while also learning from what went wrong. Many of these young companies got big offering unsustainably cheap services or blitzing the internet with ads. That could not last.

They also created an expectation that having a mattress or dinner delivered to our doors is an effortless, no-cost ballet. Instead, many of these services choked landfills with unwanted mattresses, treated workers miserably and contributed to increased traffic in cities. And many of these companies haven’t thrived financially either. Was all that disruption worth it?

It feels as if many of the tech mistakes from the past decade are being repeated on steroids. Electric vehicle companies that have barely produced cars are worth more than many of the world’s automakers. I see a lot of excess hype around NFTs and the blockchain, and new services cropping up that are likely to prove unsustainable.

I want to be an optimist about the ways technology has made our lives better. Right now, I’m not.

If you don’t already get this newsletter in your inbox, please sign up here.

Have you ever really looked at the legs of owls? They are amazing and a teeny bit silly.

We want to hear from you. Tell us what you think of this newsletter and what else you’d like us to explore. You can reach us at ontech@nytimes.com.

If you don’t already get this newsletter in your inbox, please sign up here. You can also read past On Tech columns.