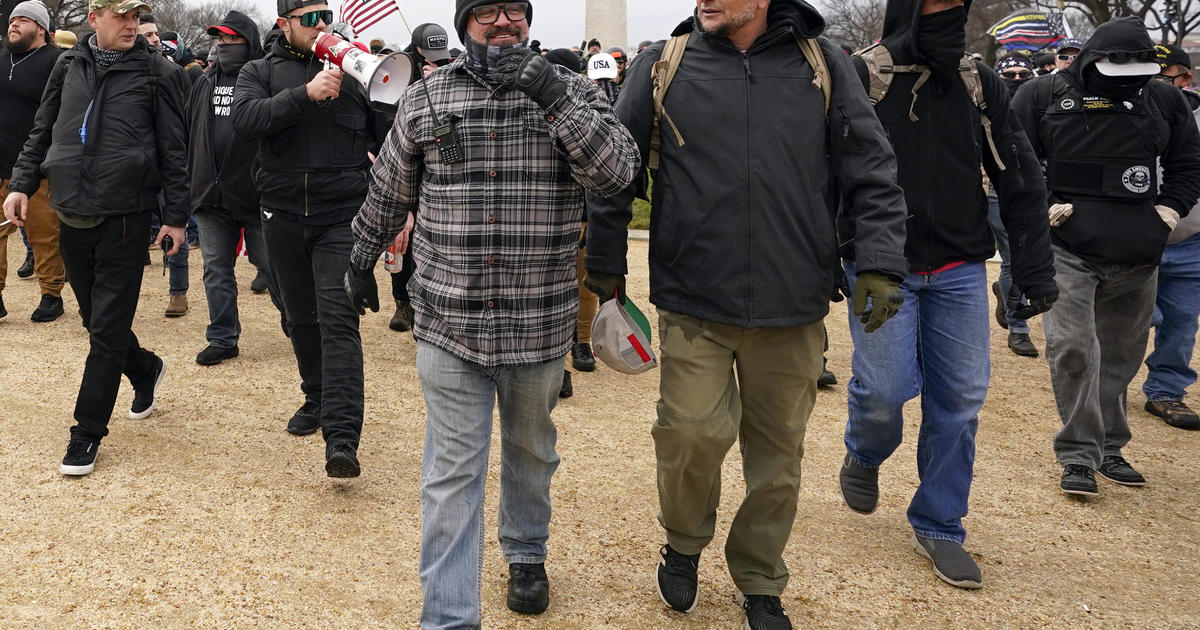 Washington –  A group of Proud Boys accused of seditious conspiracy on Wednesday successfully petitioned a judge to delay their trial until at least the end of the year. The move comes less than two weeks after their alleged leadership role in the Jan. 6 attack on the Capitol took center stage in the first House Select Committee public hearing on the riot.

Judge Timothy Kelly said he “reluctantly” agreed  to move the trial start date to December, pushing back its previously-scheduled start date of Aug. 8 .

Spearheaded by defendant Joseph Biggs –  who investigators say is an organizer of Proud Boys events and who is accused of being  at the forefront of the far-right group’s ascent on the Capitol – the group argued the publicity and attention they received during the hearings would make their August trial unfair.

“It is estimated that trial will last from four to six weeks,” Biggs’ defense attorney argued, “Approximately 20 million Americans, which includes prospective jurors in this judicial district, watched and heard that Thursday evening prime-time production.”

The House Jan. 6 select committee alleged in their first in a series of public hearing that hundreds of Proud Boys began marching to the Capitol before then-President Donald Trump’s speech at the nearby Ellipse rallying supporters even began.  One of the two witnesses who testified in the hearing was Nick Quested, a filmmaker who was with the Proud Boys on Jan. 6.

The defendants argued in court filings that this focus on the accusations against them would inject bias into a Washington, D.C. jury pool that is already likely “overrepresented among the hearing’s viewership.”

Criminal investigators in the Washington, D.C. U.S. Attorney’s Office allege the group, led by Enrique Tarrio, conspired to obstruct and stop the counting of the Electoral College votes by forming a mob to force entry into the Capitol building.

Prosecutors revealed in a court filing late last week that they sent a letter to the House select committee members asking for access to transcripts and relevant evidence that may have been collected to assist in the criminal  probe related to the riot. The interview transcripts, which the committee says total over 1,000, are “potentially relevant to our overall criminal investigations” and relevant to specific cases already in process, according to the letter from the Justice Department.

They have attempted to gain access to the Congressional evidence, but have so far failed to do so.

House Jan. 6 committee chair  Rep. Bennie Thompson said that while  the committee is cooperating with the Justice Department and may allow prosecutors to view some of the evidence later this summer, they have their own timetable for releases and would not disclose the transcripts until they deemed fit.

Biggs and some of his fellow co-defendants argued that the pending release of these transcripts and a final report by the committee, which prosecutors said they were told might happen in September, would further lead to “contaminating” the potential jurors tasked with deciding their guilt

“The most shrill and spectacular overtures about the alleged role of the Proud Boys on January 6, 2021 are arguably yet to come and showcased before the nation in the next few days,” Biggs’ attorney wrote on Tuesday in arguing the trial should be moved until at least December.

Tarrio, the alleged leader of the Proud Boys on Jan. 6, opposed moving the trial date. His attorney told the court Tarrio, “believes that an impartial jury will never be achieved in Washington D.C. whether the trial is in August, December, or next year,” adding, “Tarrio is innocent of all the accusations contained in the indictment and every day he spends locked up in jail is a travesty of justice.”

Federal prosecutors notably consented to the proposed delay, arguing it was “necessary to avoid the potential Constitutional and due process issues that have been presented in the parties’ filings.”

The government agreed that the lack of committee interview transcripts and other potentially relevant information could impede the government from providing defendants with all of the information legally required for a fair trial.

“It is reasonably foreseeable that information relevant to the defendants’ guilt (or innocence) could soon be released to the parties and the public. The parties’ inability to prepare their respective cases to account for such additional information is potentially prejudicial—to all parties,” prosecutors wrote.

They noted, “Were the trial in this case not continued, the parties in this case could find themselves in the unprecedented position of litigating a criminal trial simultaneous to the release of a Congressional report that is likely to include robust descriptions of the criminal conduct” that would be at issue at trial.

Tarrio, Biggs, and co-defendants Zachary Rehl, Ethan Nordean, and Dominic Pezzola have all pleaded not guilty to the charges against them and remain in pretrial detention. Charles Donohoe, another alleged leader of the group, pleaded guilty to conspiracy and assaulting and impeding police officers earlier this year and is now cooperating with investigators.

Wednesday’s successful calendar shift was not the first time Biggs has worked to change the course of the pending jury trial on account of alleged juror bias from the House Jan. 6 committee hearings.

Last week, Biggs’ attorney once again asked Kelly to move the criminal trial out of Washington, D.C., accusing the House committee of fomenting “misrepresentations” and “outright lies” about the Proud Boys.

“The good, well-meaning, informed, media-attentive citizenry of the District of Columbia from which jurors are drawn will believe that spectacle as packaged,” Biggs’ request said, “They trust Congress.”

So far, despite over a dozen separate attempts, no Jan. 6 defendant has successfully petitioned a judge to move their criminal cases out of the nation’s capital.

Does your health insurance cover international emergencies? Half of Americans don’t know – Survey