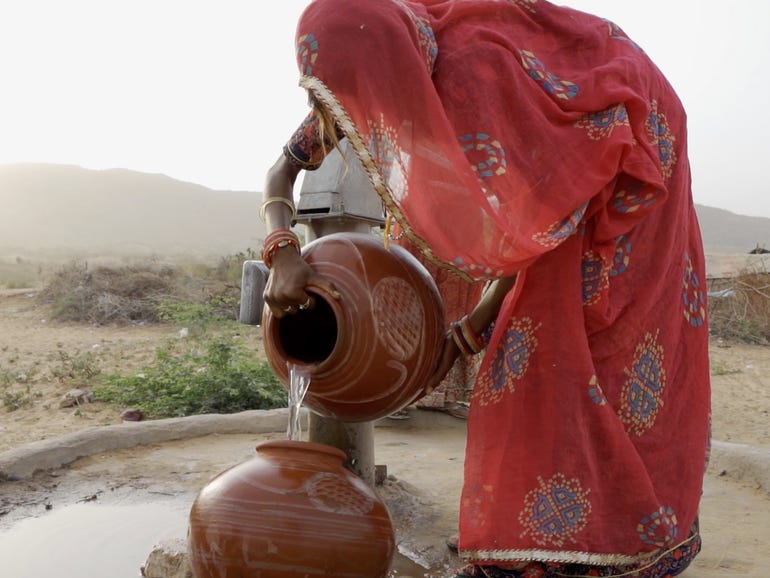 IBM announced on Tuesday that Saaf Water, a water quality platform from India, was named winner of the Call for Code Global Challenge. The startup will now get $200,000, access to a slate of IBM tools to build out their platform further. The developers behind the project will also get help from the Linux Foundation to open source their application so developers around the world can improve, scale, and use the technology as well.

Saaf Water — the first tool from India to win the global challenge — is a hardware-software platform that uses IBM’s IoT features to monitor a number of water quality parameters and provide users with accurate data about their local water sources, particularly those in rural communities.

Hrishikesh Bhandari, project lead at Saaf Water, told ZDNet that he was inspired to create the platform when his mother fell severely ill after unknowingly consuming contaminated water from her village’s public groundwater source.

He and others in the village began to discuss the larger issue of not knowing whether their local water source was safe for consumption. IBM noted that nine members of the same family died over the past 20 years in Bihar, India due to illnesses linked to arsenic contamination of groundwater.

“Since approximately 50% of the world’s population is still dependent on groundwater, that’s where we felt that there is a strict need for a system which regularly monitors and pre-warns about anomalies or degradations in groundwater, not just to the authorities but to the entire community around it,” Bhandari explained.

“That’s why we developed Saaf Water, which regularly monitors groundwater and informs the community about the degradation and the purification methods to improve it so that people around, consume ‘Saaf’ (Saaf in Hindi means clean) water.”

Satyam Prakash, hardware developer and procurement manager at Saaf Water, explained that the platform consists of a dashboard and hardware, which includes a low power cellular-enabled device that regularly monitors different groundwater parameters through various sensors.

The hardware sends data to the Node Red backend via the IBM Watson IoT platform and the backend hosts a custom undemanding machine learning model which looks out for patterns and stores it in the IBM Cloudant Database, Prakash said.

“The water quality information along with the purification method is then relayed to the dashboard and also to the hardware for the onsite visual indicator. In case of any disconnection, the hardware is capable of analyzing water quality on the edge,” Prakash added.

“The backend immediately alerts any degradation along with the purification methods to the community through the dashboard, onsite visual indicator and also via SMS to people who are subscribed to the following source, thus making the Saaf Water platform inclusive and accessible irrespective of whether they are connected to the internet or own a smartphone.”

When asked about the future, Prakash told ZDNet that the team at Saaf Water has a number of things in the pipeline, including efforts to improve seasonal anomaly predictions and enable the platform’s capabilities on surface water sources like lakes and rivers.

“We are also working on the detection of biological contamination without any lab test. Saaf Water will also come with many other capabilities like weather data integration and translations to make it much more capable and efficient. We plan to extend the reach of Saaf Water to all the communities in need around the globe,” Prakash explained.

Dr. Annapurna Vancheswaran, managing director of The Nature Conservancy – India, said the groundwater quality monitoring tool developed by Saaf Water is “promising, timely, and appears to have great potential for use by communities relying on groundwater for domestic use.”

“This open-source technology could help avoid water-related health risks by indicating unsafe water quality. We certainly Look forward to the tool being scaled up for the benefit of communities,” Vancheswaran said.

Through the Call for Code program, IBM has been supporting tech companies making a difference since 2018, helping more than 500,000 developers across 180 countries address some of the most persistent issues on the planet.

The 2021 competition focused on climate change-related issues and was broken down into three sub-themes: clean water and sanitation; zero hunger; and responsible production and green consumption.

The organizations that made it into the final five include Chinese startup Green Farm — a platform connecting local farmers to consumers — as well as Australian browser extension Honestly, which helps people identify companies that have a sustainable supply chain. Mobile application Plenti is designed to help consumers reduce their food waste through tracking technology and Project Scavenger helps people find ways to dispose of their old devices responsibly.

A panel of experts and luminaries, including former President Bill Clinton, decide on the competition’s winners each year.

Bob Lord, senior vice president of worldwide ecosystems at IBM, said it was inspiring to see the Call for Code program expand as far as it has.

“What makes Call for Code unique is the impact it is making on the ground through our deployments in communities around the world,” Lord said. “The potential of these technologies, like Saaf Water, are vast and have the potential to help save lives.”

Green Farm and Project Scavenger came in second and third place. Both were awarded $25,000 while Honestly and Plenti both were given $10,000 for coming in fourth and fifth place respectively.

IBM even created a Call for Code University Edition in collaboration with the Clinton Global Initiative University.

Chelsea Clinton, the vice chair of the Clinton Foundation, announced that waste removal platform Trashtag won the top prize and will get $10,000. The people behind the platform will also get the chance to interview for potential jobs at IBM.

The 2020 winner of the Call for Code Global Challenge — Agrolly — has been able to scale up its farming technology app so that more than 1,600 rural farmers across India and Mongolia can use it. The 2019 winner, Prometeo, was able to open source its firefighter health monitoring and safety technology so that it can be used widely.