DJI Mavic 3: The iPhone of drones 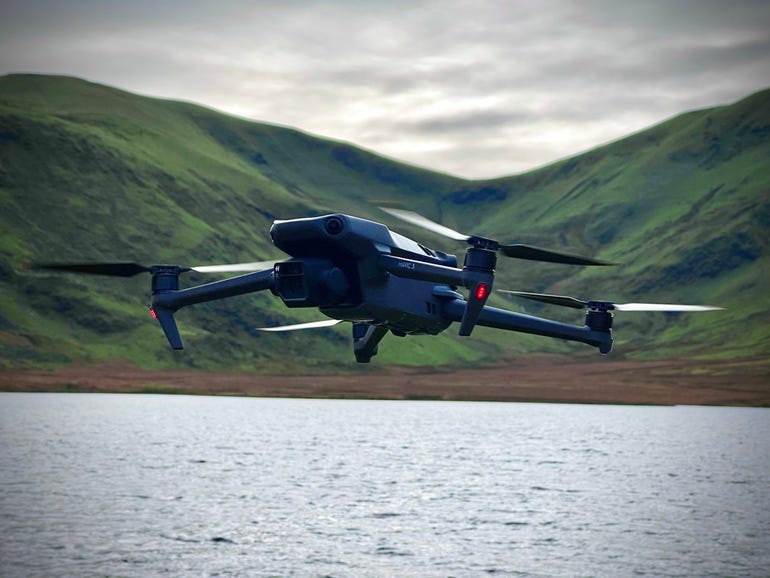 So, the Mavic 3 is DJI’s latest prosumer drone that builds on the company’s long heritage of building drones. The Mavic 3 is a follow-on to the widely successful and highly acclaimed Mavic 2 Pro, and it brings a raft of new features to the platform, including all-round obstacle detection and a dual-camera array.

Now I have a few hours under my belt, I’m able to share my thoughts and feelings on this drone and, more importantly, whether I think it’s worth the eye-watering price tag that DJI has put on this drone.

The model I’ve been using is the Mavic 3, and not the Cine version.

The Cine version differs from the regular version in that it features a built-in 1TB drive and can record using the Apple ProRes 422 HQ codec. With file sizes that can hit 1GB per 10 seconds of video, ProRes 422 HQ is not something I want or need in my life.

Over the weekend, I had the opportunity to go into the wilds of Snowdonia, North Wales, with Katherine Betteridge, an amazing local artist and creatrix who does some stunning work, both on land and underwater. Katherine wanted some drone footage of her wild swimming, and since all I had to do was stand on dry land, pilot the drone, and watch someone else get cold, it seemed like the perfect opportunity to test the Mavic 3.

Katherine was also kind enough to shoot photos of the Mavic 3 in fight.

The area we were filming in was windy, not too windy to ground the drone, but windy enough to be a bit of a challenge.

How does the Mavic 3 perform in the wind?

It was rock solid in the sky.

Battery life was also good. OK, nowhere near the 46 minutes of no-wind flight time that DJI claim (I’ve heard that a firmware update might bring some battery life improvements with it), but way better than my Air 2S could do. I went through a couple of batteries, and each gave me 29 minutes.

I’m happy with that. And it’s not like I fly it conservatively, throwing it into sports mode to move between shots often.

As for the camera system, the Hasselblad 24mm equivalent 4/3-inch CMOS camera is stunning. It’s crisp enough to capture detail, but soft and silky enough to be cinematic. Thanks to the variable f/2.8 to f/11 aperture, I was able to capture smooth 24 frames per second video without needing to use ND filters on the camera (DJI supply ND 4/8/16/32 filters with the drone and add ND64/128/256/512 with the Cine version).

I shot video using both Hasselblad Natural Color Solution (HNCS) and the flatter D-Log profiles, and I must be honest and say that while the D-Log offered the most scope for post-processing, I found the results using HNCS to be excellent. The output is far better than the video my Air 2S would capture (which itself was excellent), and it’s much easier to get professional quality out of the Mavic 3.

The Hasselblad camera also shoots 20MP photos, and while the results are excellent, I’m having a tough time seeing much difference when I compare the captures to 20MP photos shot using the Air 2S using its 1-inch sensor. I can see the larger sensor perhaps offering an advantage in lower-light conditions, but for general shooting, it’s hard to see a difference.

I’m still trying to get my head around how to use the Tele lens. With a ½-inch sensor on a 162mm equivalent lens, this camera is decent, but right now, I can only shoot in auto, and until DJI give us full control, along with the ability to shoot RAW photos (currently it’s JPG only, and I don’t know if this will change), I’m unclear as to how best to use this camera.

I’ve also noticed that this Tele camera suffers a lot from focus hunting, where it’s trying to lock focus a lot, and I lost a lot of footage because of that.

While most of the time the Mavic 3 felt rock solid when in the air, I did sometimes feel like there were flight performance issues, and especially when flying below five meters. I was experiencing a lot of hesitation and juddering and low power. While the obstacle avoidance works (and works well), the drone feels odd and erratic in flight. Sure, it avoids obstacles, but the drone feels like it’s flying in a very uncertain way, and it’s hard to have confidence in it.

Maybe this is by design, or maybe it will improve.

And this brings me to the rest of the drone.

A lot of stuff is unfinished. Right now, you can basically fly it, capture photos and video, and that’s it. All the advanced features such as the ability to shoot panoramas and video effects like dronie and orbit are missing.

According to DJI, there’s a big firmware update coming in January that will add these features.

This is the iPhone of drones. Release now, fix later. But also a really solid, well made product. With a price tag to reflect that.

Come the firmware update, this is going to be a very different drone. From that point, I hope that we’ll see more features added to the Tele camera (manual control and the ability to shoot RAW, please), and maybe some overall improvements to the camera, battery life, and flight characteristics.

Also, I wouldn’t be surprised to see this being the end of the line for DJI’s Phantom line. The Phantom is big and huge and noisy. The Mavic 3 is compact and foldable and a lot quieter.

Yes, this is likely the end of the Phantom.

This is not a consumer drone. Unless you’re making money from piloting, you definitely don’t need this drone. This is a pro drone for pro content creators and comes with a pro price tag.

If you’re shooting for social media or YouTube, then you definitely don’t need the Cine version, and you’d be hard pressed to justify the base model.

If your drone helps put food on your table, then this is a well worth considering. It flies well and delivers great photos and video.

The feature that hobbyists would enjoy is the peace of mind that the obstacle avoidance brings to flying. It really is good, and could help prevent ugly, expensive crashes. But you’re paying serious dollars for that one feature.

So, bottom line, it’s an amazing drone, and the upcoming firmware update is going to make it better. But with a starting price tag of $2,199, it’s a serious investment.

WhatsApp ramps up revenue with global launch of Cloud API and soon, a paid tier for its Business App