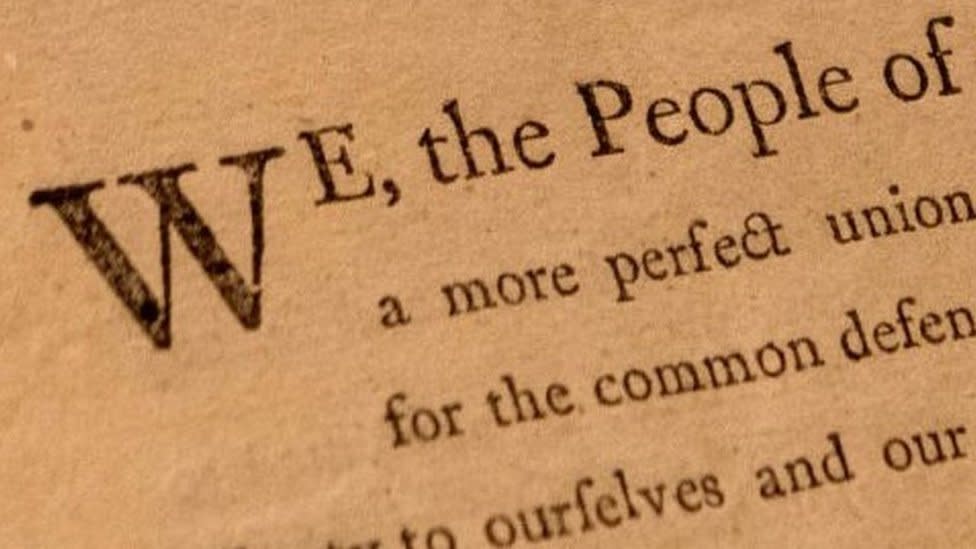 A crowd-funded effort to buy a rare 1787 copy of the US constitution at auction claims to have received more than $13m (£9.6m) worth of cryptocurrency donations.

The group, ConstitutionDAO, says it plans “to put the constitution in the hands of the people”, and hopes to raise at least $20m.

But it is not clear how ownership will be arranged if the bid succeeds.

Published in 1787, auctioneers Sotheby’s estimates a sale price of up to $20m, when the auction takes place on 18 November.

There are 13 known copies to have survived from a run of 500 originally printed after the text was settled at the Constitutional Convention in Philadelphia, Pennsylvania.

The copy for sale is one of only two not held in the collection of an institution, Sotheby’s says.

The group wants to put the document on public display.

The idea is to enable individuals to come together to make purchases and share ownership, with their transactions and operating rules recorded on the blockchain – the same underlying technology on which cryptocurrencies like Bitcoin and Ethereum run.

ConstitutionDAO launched just a week before the auction, and is soliciting money with which to buy the constitution document in Ethereum.

On its website, the group says it is “pooling together money to win this auction”.

At first, the website told contributors they were buying “fractional ownership and governance. You will own a piece of the constitution based on how much you contribute”.

That has since been changed to say those who contribute will not get a share in owning the constitution.

The question “Am I receiving ownership of the constitution in exchange for my donation?” is answered: “No, you are receiving a governance token, not fractionalised ownership”.

The “governance token”, the website says, could be used to “advise” on “where the constitution should be displayed, how it should be exhibited, and the mission and values of ConstitutionDAO”.

According to a frequently asked questions (FAQ) document posted to the group’s Discord social media channel by a core contributor to the project: “After the initial purchase, the community will be able to restructure ownership” in line with the group’s mission and values.

The website says there will be “refunds” should the auction bid be unsuccessful.

However, the largely unregulated world of cryptocurrency brings with it many risks.

The FAQ warns of the possibility of hacking or of theft of money, although it says “we have made everything as secure and foolproof as possible given the time constraints”.

The cryptocurrency funds that will be used to make the purchase are in a wallet currently controlled by 13 core contributors, with nine being required to approve transactions.

DAOs have a chequered history. In 2016, “The DAO” – a distributed venture capital organisation – raised $150m, only to see $50m disappear in a hack because of a flaw in the code that it used.

The legal status of DAOs is also not clear, experts say.

Sotheby’s told the BBC: “As DAOs are not legally recognised entities in most jurisdictions, Sotheby’s requires DAOs to take certain legal steps to ensure the entity can participate in our auctions at this time.”

As a result, the project has formed a US limited liability company in order to take part.

The group says that it is seeking “an esteemed partner” to publicly display the constitution.

“The eventual home must have the expertise to properly house, store, and maintain the artefact,” the group says.

“Additionally, the community has expressed strong preferences for institutions that are free to the public and willing to cover the costs associated with housing the document.”

Proceeds of the Sotheby’s auction will go to the Dorothy Tapper Goldman Foundation – a non-profit group that works to promote understanding of democracy.