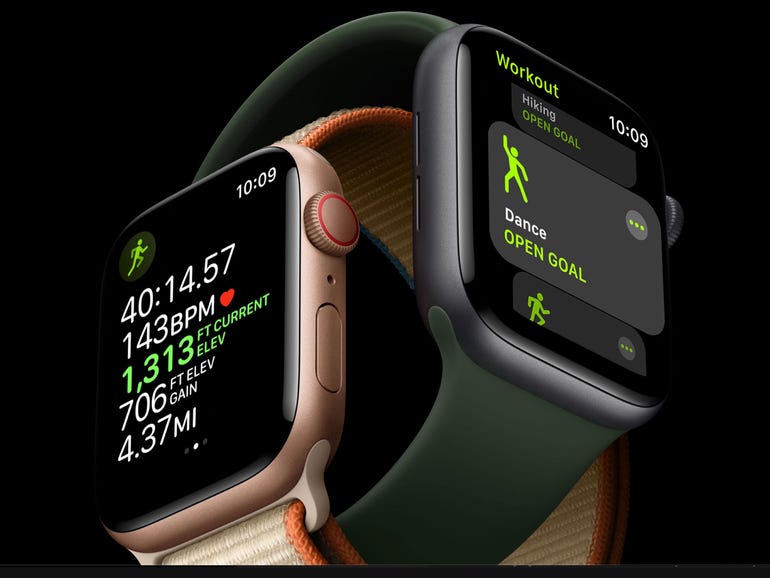 Like most smartwatches and all fitness trackers, the
Apple Watch

is very much designed for everyday use. In fact, its ample range of sports and activity tracking features pretty much guarantee it’s going to be put in situations where a dropped barbell, incoming fastball, or even just a simple tumble could spell disaster for its display. Peripheral makers realized this before the first Apple Watch models ever reached consumers, and immediately began churning out solutions to protect against these very expensive accidents.

Ranging from simple films to complete, watertight cases, these products can completely deflect a blow that might have cracked or chipped a screen or, at worst, take the hit for their companion Apple Watch and be replaced far more cheaply than it could.

This list provides a cross-section of some of the best options currently available. Whether you’re shopping for a stealthy, but protective screen film, or a ruggedized, no-holds-barred full enclosure, we’ve selected the best options for keeping your pricey smartwatch nice and safe, no matter what traumas you may subject it to.

It may seem a bit odd that one of the most ruggedized Apple Watch screen protectors on this list doesn’t actually cover the device’s display. Instead, it surrounds it with one of the beefiest enclosures we were able to find, including raised bezels that greatly reduce the chance of anything impacting the display.

The Catalyst Waterproof Case is also one of the few options that even enclose the smartwatch’s Digital Crown, providing a water-tight seal that Catalyst claims can essentially double the unit’s 164-foot of water resistance to 330 feet.

This is, however, an option that is really only for those that expect to be wearing their Apple Watch in the most extreme conditions. As such, it does come with some sacrifices, including a lack of ECG support due to encasing the necessary buttons, and a permanent band that does not officially support being replaced.

Spigen is a brand that should be well known to most people that have shopped for a smartphone case in the past decade. Their affordable and varied enclosures tend to sit at the top of Amazon review metrics and consistently provide solid, affordable protection for the devices installed in them.

This entry into the company’s offerings attempts to find a balance between a ruggedized, full enclosure and unrestricted access to all functions of the Apple Watch. This includes leaving the Digital Crown bare to maintain ECG functionality for models that support it, and using a thin backplate that doesn’t interfere with the official Apple Watch charger.

Although most are unlikely to peg this option as being fashion-forward, Spigen has attempted to cushion the potential blow to any wearer’s aesthetic by making it available in Black, Navy Blue, Olive Green, Rose Gold, and White. Certainly, it’s not the stealthiest accessory, but it provides an excellent level of protection to the wearer’s wrist-worn investment without as many compromises as the Catalyst option seen above. 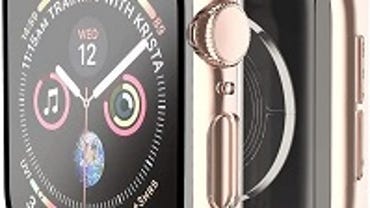 
The Smiling Case is, as the name might suggest, one of the slew of OEM options in this product category that can be found on Amazon. However, its reviews and its rare combination of a built-in, tempered glass screen cover with a full enclosure design make it a standout among those hundreds of other options.

While a full enclosure can never be truly invisible, this protector is about as close as you can get. Using clear plastic and tempered glass, a bystander might actually miss it at a casual glance. Despite its stealth, the product still provides protection for the metal sides and display, while promising accurate and responsive pass-through of all touch commands.

The only downside for some users might be the cover’s interference with the Digital Crown and Side Button. Although it lives up to its “Ultra-Thin” monicker, it still reduces the protrusion of the crown, making it slightly harder to turn, while also adding a recess users will need to reach into to depress the Side Button. If this seems like too much inconvenience, then a full enclosure likely just isn’t the best option for you. 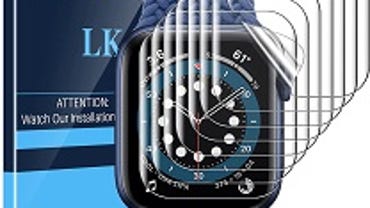 
For wearers that want to protect their unit’s display, but just can’t stand the idea of covering any of the Apple Watch’s visual appeal, the LK Screen Protector is an excellent option. Made of “Self-Healing” TPU, the skin is designed to provide 99% transparency and complete retention of screen sensitivity and responsiveness.

In addition to being able to automatically remove bubbles under the film following installation, LK also promises that the film will heal any scratches the user may subject it to within 24 hours of their appearance. Even if this weren’t the case, the low cost for a large multi-pack means that replacing the screen protector barely costs more than one dollar.

Of course, films like this and the SuperShields option below will protect from scratches, and may help to ward off minor impacts. But, they will do little to prevent damage from severe blows. For owners expecting that type of abuse, we suggest one of the sturdier, albeit far more noticeable options towards the top of this list. 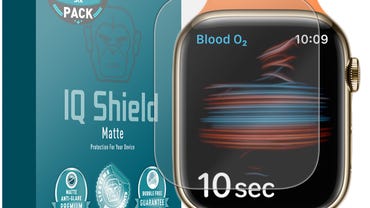 
The IQ Shield option shown here addresses an issue that no other entry on this list does: glare. Anyone that’s struggled to see what their Apple Watch was trying to tell them while outdoors or directly under a harsh overhead light should appreciate the possibility of having those bothersome reflections reduced or eliminated by the matte finish on the IQ Shield Screen Protector.

IQ Shield is also somewhat unique in designing its flexible film to fit right up against the curved edges of the Apple Watch display, something many manufacturers skip in favor of a smaller, rectangular film with visible edges. This “precise fitment” not only improves the appearance of the protector, but also helps eliminate the annoying sensation of running over the edge of a screen protector when using the Apple Watch touchscreen.

Like most matte-finish films, the IQ Shield version does have some minimal impact on things like screen brightness and color accuracy. However, the benefit of not having to fight bright outside lights, especially when trying to view the somewhat dimmer displays on older Apple Watch models, will likely be more than enough to make up for any modest impact on image quality.

How did we choose these screen protectors?

The range of abuses an Apple Watch could see in its life is as varied and diverse as the user base it serves. Because of these, we’ve chosen a range of products for an assorted clientele. We feel each of these offerings is the best of the best in their particular slot of this product category. That said, it would be silly to compare a ruggedized, complete enclosure to a simple screen film. Obviously the former offers the most protection, but the latter may be preferable for users unwilling to accept any aesthetic sacrifices in the name of safety and protection for their Apple Watch. This is why each of these options includes a note or two about their ideal user, and where that user’s priorities may lie on the spectrums of form over function and protection versus visibility.

Do I really need a screen protector?

This is, of course, a personal decision. For some, even the most inexpensive Apple Watch can be a major investment, well worth protecting. For others, the idea of damaging their watch’s hardy Ion-X glass may be unlikely enough, or inconsequential enough that they would prefer to just take the risk and pay for repairs, if needed. Ultimately, it’s a matter of budgeting for the cost of potential future repairs versus the definite cost and possible aesthetic blow resulting from adding some form of screen protector.

What if I have AppleCare+ for my Apple Watch?

Apple’s well-known AppleCare+ program has saved many a device from an early grave. However, it’s important to understand the AppleCare+ policy on “accidental damage,” which any cracking or chipping of the display would fall under. According to Apple, each Watch owner qualifies for up to 2 accidental repairs per year. While this seems generous enough for all but the clumsiest owners, it also comes with a $69 fee for each of these repairs. That’s in addition to the initial $79 cost of the extended warranty. Any repeat offender maxing out their yearly repair allowance is going to very quickly rack up quite a bill for screen replacements, and may want to consider just adding a screen protector instead.

Will a screen protector void my warranty?

The short answer: no. Most screen protectors of any decent quality can easily be removed without leaving any sign that they were ever present. Since it’s always a good idea to remove any aftermarket accessories from any electronic device before bringing it in for service, Apple will likely never know the screen protector existed, and wouldn’t much care, even if it did.

Which screen protector is right for you?

The selections here were chosen to represent the full spectrum of options available. The most important thing in determining where your priorities fall within this range of products is deciding whether aesthetics are more important than protection, or vice-versa. The fashion-conscious among us probably wouldn’t be caught dead in some of the ruggedized options near the top of the list, while the extreme athletes out there might chuckle at the relatively meager protection offered by a simple screen film. You have to decide how much of an aesthetic sacrifice you’re willing to make in the name of protecting your Apple Watch.