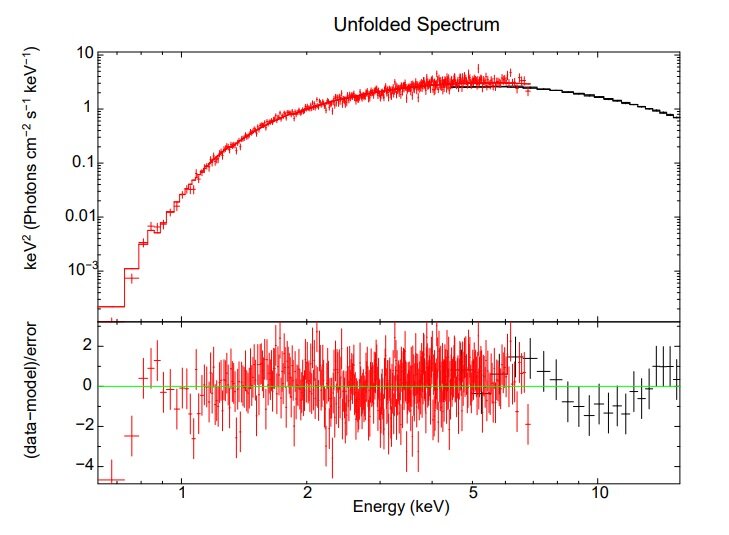 Using the AstroSat spacecraft, Indian astronomers have investigated a low-mass X-ray binary known as GX 3+1. The study provided more insights into the properties of GX 3+1 and detected a thermonuclear burst from this source. The findings are reported in a paper published June 15 on arXiv.org.

LMXBs may exhibit transient outbursts during which an increase in X-ray luminosities is observed. Some of these outbursts are characterized as type I X-ray bursts—thermonuclear explosions taking place on the surface layers of neutron stars.

Detected in 1964, GX 3+1 is a persistently bright X-ray binary source that was classified as an LMXB of atoll subtype with a soft spectrum of about 2-10 keV. First type I burst from GX 3+1 was detected in 1983 and since then this source was found to be a very active X-ray burster, with bursting activity inspected by numerous studies.

However, many properties of this LMXB still remain uncertain. That is why a team of astronomers led by Ankur Nath of Tezpur University in India decided to inspect GX 3+1 with AstroSat’s Large Area X-ray Proportional Counter (LAXPC) and Soft X-ray Telescope (SXT).

“In this work, we report the AstroSat observation of the bright atoll source, the LMXB GX 3+1. The light curve obtained from the LAXPC 20 [one of the three LAXPC counters] instrument indicated the presence of a thermonuclear burst feature of type I,” the researchers wrote in the paper.

As noted in the study, the observations detected one type I thermonuclear burst lasting approximately 15 seconds. A drop in count rate in the light curve of the X-ray burst was found when the narrow energy bands become harder. The burst turned out to be the brightest in the 5–8 keV energy band with a count rate higher than the softest band (3–5 keV). Moreover, it was found that the burst decayed faster at higher energies, what seems to suggest that the temperature is decreasing as the burst evolves.

By analyzing the data, the astronomers noticed a double-peak feature in the burst at higher energies (8–12 keV, 12–20 keV). This was a relatively quick event, lasting about two seconds, within which the burst exhibited the double peak, indicating a radius expansion phase.

“Based on our time-resolved spectroscopy, we claim that the detected burst is a photospheric radius expansion (PRE) burst,” the researchers concluded.

The collected data allowed the team to estimate the Eddington luminosity of GX 3+1, which was found to be at a level of 287 undecillion erg/s. The study also put more constraints on the distance to this system, finding that it is located most likely some 30,300 light years away.