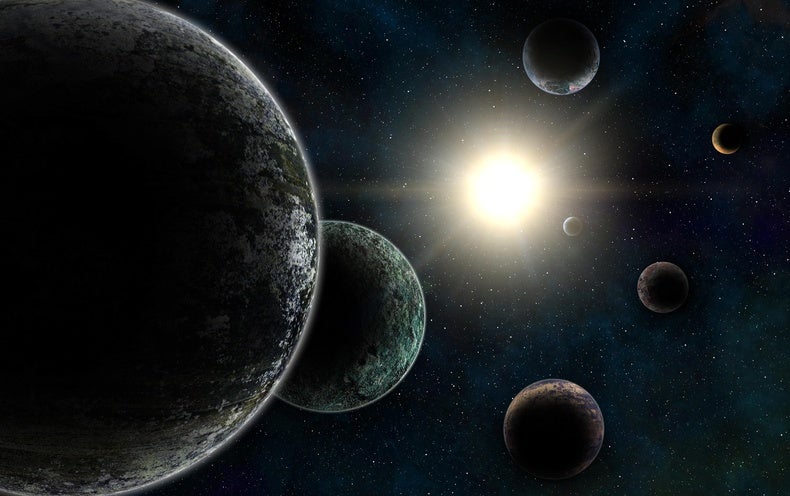 Some of the best movies are origin stories. When we know where a superhero is coming from, then we can understand why they do what they do. The same goes for planets: knowing how they formed is key in understanding their internal structure, geology and climates. We know a lot about how Earth formed from decades of analyzing meteorites and lunar rocks. We think the final phases of Earth’s growth involved titanic collisions, the last of which spun out a disk of vaporized rock that coalesced into the moon.

But what about the thousands of planets we’ve found around other stars; did they form like Earth? Answering this question may seem hopeless because we’ll never have rocks from those planets to analyze. But there may be another way, and this way is important because it gives us the rare opportunity to compare our planet’s origins story with those of rocky exoplanets.

In a recent study published in Nature Astronomy, we used the orbital architecture of a system of exoplanets to figure out how planets might form, using the TRAPPIST-1 system as an example. This system is iconic among exoplanets: it contains seven known planets, each close to Earth’s size and three of which receive a similar amount of energy from their tiny red star as Earth does from the Sun.

For the purpose of our analysis, a key feature of TRAPPIST-1 is orbital resonance. After a specific number of orbits, each pair of neighboring planets realigns. For example, among the outer pair of planets, called g and h, orbital alignment repeats every three orbits of planet g and two orbits of planet h; this is a 3:2 resonance. Each adjacent pair is in a similar resonance. Together, all seven planets participate in this orbital dance, forming a resonant chain.

In paintball, each time a person is hit, the impact leaves behind a blob of paint, so you can tell at a glance how often any player gets shot. Likewise, the surfaces of planets and moons retain the signs of impacts; when an object from space crashes down, it explodes and leaves behind a crater. You can see the biggest craters on the Moon by eye; Tycho is one of the most dramatic.

We wanted to figure out how much space junk—meaning, leftover asteroids and comets—could have bombarded the TRAPPIST-1 planets. A key piece of our study was to calculate exactly how fragile the system’s orbital resonances are. It turns out the resonances are extremely easy to break. When an asteroid or comet collides with a planet, or even just passes close by, the planet’s orbit shifts a little. Add up a few of these shifts and the orbits of neighboring planets are spread apart enough far enough to lose their resonance. From that point onward, they can never realign again.

Using orbital simulations, we determined how much space junk would have collided with each TRAPPIST-1 planet if the system’s resonances had been lost. Of course, TRAPPIST-1’s resonances were not lost; they have survived for billions of years since the planets formed, and we observe them today. TRAPPIST-1 is like a paintball player wearing an outfit that’s still almost perfectly clean. Our simulations show us the “worst-case scenario”; the maximum amount of material that could have impacted any of the TRAPPIST-1 planets since they formed is tiny (in cosmic terms), less than 1 percent of Earth’s mass. Any more than that would have permanently disrupted the resonances we see today.

Because there were so few impacts, the TRAPPIST-1 planets must have grown much faster than Earth. Resonances like TRAPPIST-1’s form by orbital migration, as the growing planets’ orbits slowly shrink by interacting with the gaseous planet-forming disk. Once the disk is gone, resonances can break but they cannot re-form. So, the TRAPPIST-1 system must have been fully formed within the lifetime of its star’s disk—just a few million years. There was at most a gentle bombardment over the ensuing billions of years.

In contrast, analysis of Earth and moon rocks indicates that the planet-sized collision that formed the moon took place about 100 million years after the start of solar system formation. The TRAPPIST-1 planets may well have experienced such giant collisions, but only very early in their histories, before the resonant chain was set in stone. We don’t fully understand how these different formation pathways affect the internal evolution, geology and climate of the TRAPPIST-1 planets as compared with Earth, but it’s an active area of study. For instance, it’s possible that their rapid growth would greatly increase the amount of water that could be stored within rocks in the planets’ interior, but decrease the amount that could remain as surface oceans.

Our study borders the controversy-ridden waters of what objects should be called “planets.” Following the International Astronomical Union’s definition, the factor that was used to demote Pluto to the status of “dwarf planet” was that it has not cleared the neighborhood around its orbit of space junk. Rather, Pluto orbits within the Kuiper belt of ice-rich cometlike objects. Our simulations show that no substantial population of space junk can remain in the TRAPPIST-1 system. Each of these seven objects therefore deserves to be called a planet.

For now, we can only apply our new technique to the handful of other systems, the resonant chains with nearly clean paintball jerseys. Yet these are some of the most interesting systems that we know from both an orbital point of view and because one theory proposes that almost all planetary systems spend some time as a resonant chain (although very few resonant chains survive). Understanding the bombardment histories of planets in these systems is a first step toward telling the origins stories of other worlds.

COVID-19 associated with increase in new diagnoses of type 1 diabetes in youth, by as much as 72%