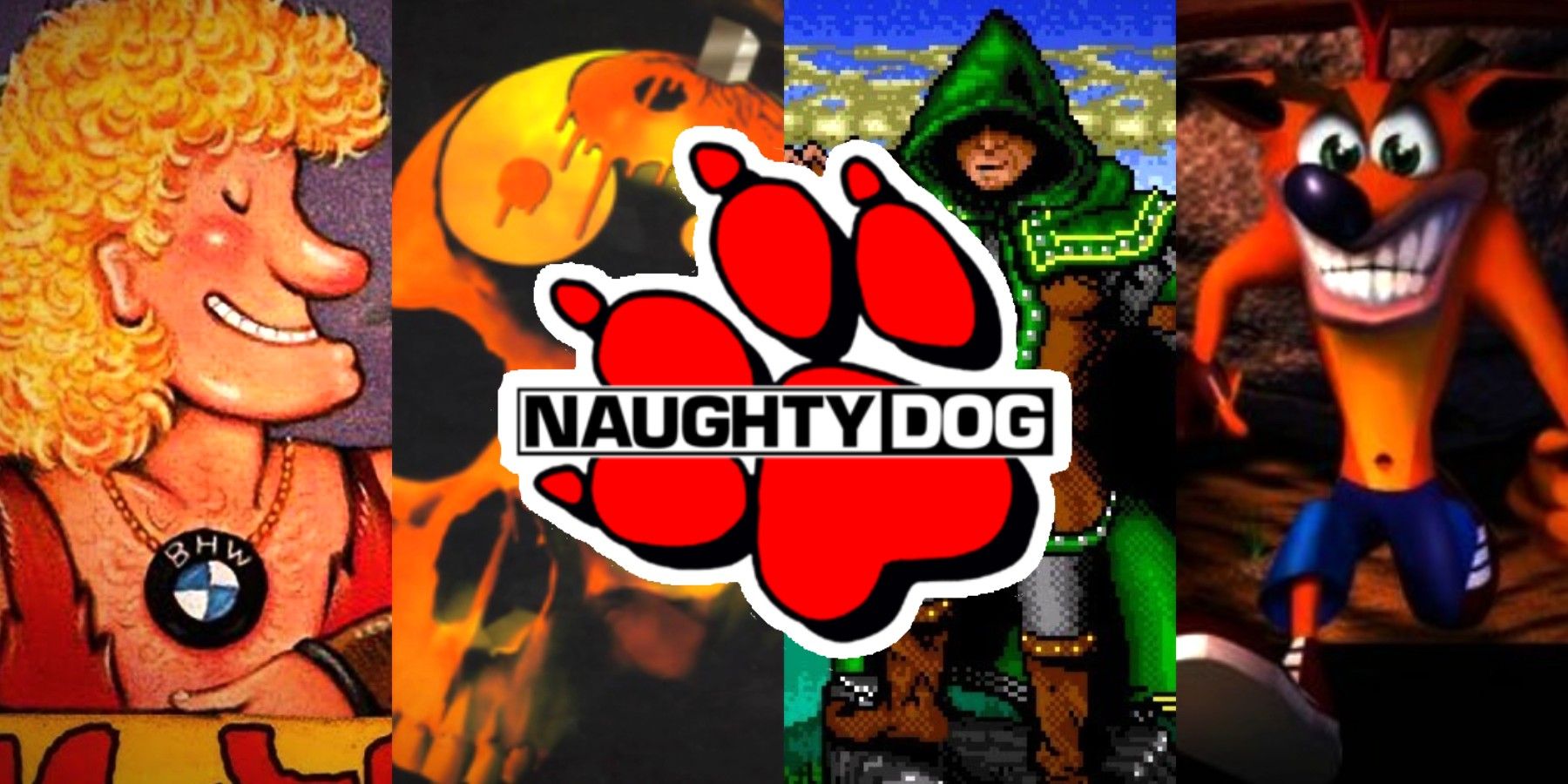 Thanks to Naughty Dog’s recent success, some players might be unaware of just how long the studio has been active in the gaming industry. While a case can be made for franchises like The Last of Us and Uncharted being its crowning achievements, the studio’s history predates both by several decades. Even Naughty Dog’s Crash and Jak and Daxter, are comparatively recent creations in the grand scheme of things.

Founded in the early ‘80s by three childhood friends under the name JAM Software, Naughty Dog would go on to become one of the most critically acclaimed studios in gaming. Things didn’t start out like that, though, as several tough lessons were learned along the way before Sony eventually brought Naughty Dog into its first party family. The games that defined its early history in the ‘80s and ‘90s are so far removed from what the studio is known for today that some of its current fan-base might be shocked to learn about them.

RELATED: What’s Next for Naughty Dog?

In 1984 Jason Rubin, Andy Gavin, and Mike Goyet, came together to create JAM Software. While the studio would eventually take on its modern moniker, JAM was originally chosen as an acronym of its founders’ names. When Goyet left the fold early on though, instead of abandoning their dreams, the remaining teenagers retooled their operation into ‘Jason and Andy’s Magic.’ Having previously worked on smaller concepts in Gavin’s basement, the pair were keen to bring their first full game to life.

The Apple II’s Math Jam, released in 1985, was the pair’s first complete creation. While the studio would go on to team-up with some big publishers, Math Jam remains its only independently published title. In terms of design concepts, it’s also hard to imagine there being a bigger disconnect between it and Naughty Dog’s recent blockbusters. Instead of guns and zombie-like foes, Math Jam was envisioned as an educational title designed to teach kids math. After failing to get Math Jam approved for use in schools though, it quickly faded from the studio’s consciousness.

RELATED: The Latest Last of Us Remake and Factions Mode Rumors Explained

Undisturbed by Math Jam’s failures, Rubin and Gavin refocused JAM Software towards its second project. Ski Crazed would go on to become the teenage duo’s first taste of success on the Apple II. In terms of design philosophies, the game was envisioned as a simple skiing simulator. Players competed in a Kilimanjaro-based tournament in an attempt to gain the affection of the crowd while avoiding basic obstacles. Even though the game is simple by modern standards, the inclusion of a level editor technically acted as a predecessor to some of Sony’s recent titles like Dreams and LittleBigPlanet.

While Ski Crazed is estimated to have only sold 1,000 copies, it still gave Rubin and Gavin a valuable window into the gaming industry. That’s partly because Baudville, a publishing house at the time, picked up the distribution and commercial rights to Ski Crazed for around $250. Despite being the brain-child of two teenagers, with the publisher at its side JAM Software became a modest player in the gaming industry of the ‘80s and early ‘90s.

Considering that the studio had focused on simple titles during its earliest days, JAM Software’s third creation was something of a departure. Inspired by the adventure games of the era, Rubin and Gavin decided to put their own spin on the genre. With Baudville once again acting as their publisher, the pair brought Dream Zone to life in 1987. Originally developed for the Apple II, the game was ported to the DOS, Amiga, and the Atari ST, a year later in a sign of JAM’s growing confidence.

It’s fair to say that Dream Zone is unlike anything else that Naughty Dog has created under either of its monikers. Thanks to an eccentric scientist’s potion, the player-created protagonist of Dream Zone becomes trapped within their own nightmare. While facing off against bizzare creatures and societal allegories, the player fights to escape from their internal prison. Thanks to some positive press, the game managed to sell a respectable 10,000 copies.

Of all the games that Naughty Dog created in the ‘80s and early ‘90s, Keef the Thief: A Boy and His Lockpick is one of its most important. Aside from being the first project to carry the studio’s now iconic moniker, Keef the Thief was brought to life with the backing of Electronic Arts. Released in 1989 on the Amiga, Apple IIGS, and DOS personal computers, the sword and sorcery role-playing game would define an important era in the studio’s development.

Within the first-person point-and-click RPG, players take control of the titular Keef as he explores a fantasy-themed universe. Revolving around the concept of stealing as much loot as possible, Keef the Thief features some of the hallmarks that have become Naughty Dog’s bread and butter in recent generations. Even though the game failed to capture the imagination of audiences at the time, the studio’s trademark character development and clever humor were both present.

Spurred on by its new name and relationship with EA, Naughty Dog quickly turned its attention to its next project following the release of Keef the Thief. 1991’s isometric RPG Rings of Power was the end result. Aside from the game’s genre, what sets Rings of Power apart from Naughty Dog’s earliest projects is the fact that it was the studio’s first ever console release. Developed exclusively for the SEGA Genesis, EA was able to create cartridges for the console without the platform holder’s support.

Even though Rubin and Gavin were attending separate colleges at the time, the pair were still able to get Rings of Power finished on time. Inspired heavily by The Lord of the Rings, players were tasked with collecting 11 rings over the course of the game’s narrative. Despite being Naughty Dog’s entry-way into console gaming, Rings of Power received mixed reviews in the ‘90s. Features like minimal location markers and an open-ended world map, ideas that have been celebrated in recent eras, were deemed to be too frustrating for many players.

RELATED: Rumor: The Last of Us PS5 Remake Could Include New Factions Mode

Way of the Warrior

Following the release of Rings of Power, Naughty Dog entered one of the hardest periods in its history. Forced to self fund its next project, the studio came close to bankruptcy while it was attempting to create Way of the Warrior for the 3DO console. However, thanks to a meeting with Mark Cerny, the lead designer behind Sony’s PS Vita, PS4, and PS5, the studio was saved from closure. At the time, Cerny was working for Universal Interactive Studios and was able to sign Naughty Dog up for a four game publishing deal.

Taking the funding that Universal provided, Naughty Dog was able to eventually finish production on Way of the Warrior in 1994. Ostensibly the game was stylized as a fighting title in the same mold as franchises like Mortal Kombat. While Way of the Warrior is remembered today for its graphic violence, the fact that its characters were based on and voiced by the studio’s friends is arguably more remarkable.

Even though Way of the Warrior achieved decent commercial success, it was the final set of projects that Naughty Dog undertook in the ‘90s that safeguarded its future. In an attempt to create a mascot that could rival icons like Mario and Sonic, the studio got to work on the first Crash Bandicoot game following Way of the Warrior’s release. In many ways, what the expanded studio created broke the mold for gaming at the time.

Designed to be a 3D action-platformer, from only a quick glance Crash Bandicoot stood out from its contemporaries. Even though Universal retained the rights to the series, Sony was so impressed with what Naughty Dog had created that it assumed control of the game’s publishing duties. In 1996, the first Crash Bandicoot game subsequently launched as a PS1 exclusive, before going on to becoming a cornerstone of the fledgling ecosystem’s success.

Before the ‘90s came to an end, Naughty Dog released two direct sequels to Crash Bandicoot in addition to the beloved Crash Team Racing. Even though 1999’s kart racer marked the end of the studio’s relationship with the franchise and IP, its connection to Sony only deepened from there. Spurred on by the challenges and lessons it had overcome in the ‘80s and ‘90s, Naughty Dog became the first party studio players will recognize today in 2001.

MORE: How a PS5 Uncharted Can Revamp The Series Formula

Ben is a writer who’s obsessed with all things PlayStation, Pokemon, motorsport, and sci-fi. Tragically allergic to sushi and white chocolate. No relation to the Harry Potter villain. (Probably)

New PlayStation Plus: Games, Pricing, And Everything We Know