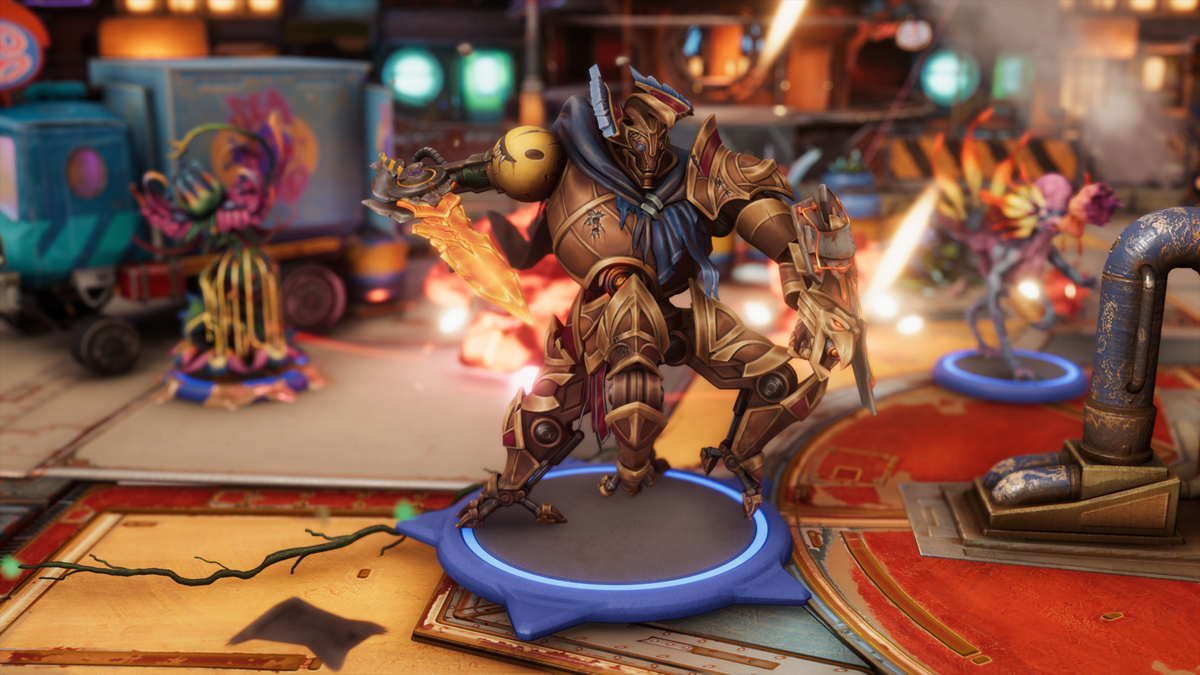 It’s strange to hear Subnautica’s developer say the game has a “shelf life”. I sunk hours into that extra-terrestrial explorer, venturing into the deep to find the resources to make my escape from the planet and solve the game’s many mysteries.

It spawned a sequel, Subnautica: Below Zero, that hooked me all over again. Yet Unknown worlds is leaving the series behind to try something new, something that it hopes will sustain it for years, in a way that Subnautica couldn’t – even after it sold millions of copies.

Back to the drawing board

At first glance, Moonbreaker looks like a spin on the Subnautica games, as though the team had swapped out oceans for the surface of a moon. Its weird and wonderful art style and out-of-this-world aliens brought me back to the days of deep-sea dives. But don’t be fooled, Moonbreaker is set in an entirely new universe, full of its own mysteries.

“It’s completely different from Subnautica,” Cleveland says. Moonbreaker is a turn-based strategy game, playing out like a set of tabletop miniatures. You are the captain of a crew of ragtag sci-fi aliens, and you’re trying to make your way in the world by winning battles, collecting units, and fleshing out your roster.

Each game of Moonbreaker starts with you and your opponent dropping your captains into an arena, and it only ends when one of them is dead. Every turn, you build energy that can be spent summoning in more crewmates from your ship above or spending that energy on special abilities in the field.

As with XCOM, and other turn-based tactics games, each of your units has weaponry and skills that let them play roles, such as a long-range damage dealer or chunky tank, and you’ll have to use them smartly to beat your opponent. You must carefully position your units to hit your enemy with the most damage you can without exposing yourself to danger. After the solo dives of Subnautica, this 1v1 multiplayer game is quite the change of pace.

Moonbreaker also differs from Subnautica in that it’s built to run for years, with new seasons of content being released every few months. Each new season will bring new units, but also a new episode of an audio drama – an experiment in storytelling that is a significant step away from Unknown Worlds’ previous games.

In Subnautica, you unfurled the story. Multiple narrative threads ran in parallel, and they progressed depending on what you interacted with. For example, when I played Subnautica, I could delay the main story by simply not visiting the starter island. Instead, I worked through the side-quests listed in my futuristic iPad, searching the ocean for shipwrecks I could use to fix my crashed vessel. This isn’t the case in Moonbreaker; there isn’t a campaign you’ll progress through. Your multiplayer battles are in the world of the story, but they don’t progress it. Instead, things move forward in the audio drama – this linear style is more akin to a book.

This novel inspiration may come from sci-fi and fantasy author Brandon Sanderson, writer of the New York Times chart-topping Mistborn series and Stormlight Archive. Sanderson’s been building out the world of Moonbreaker and writing the audio dramas that will release with each season.

You may not need to own Moonbreaker or even play the game to access new episodes, Unknown Worlds is considering releasing them as podcasts so Moonbreaker can live “outside of the games”, Cleveland says. Potentially this opens the door to new players – “people who haven’t bought the game can learn about it that way,” Cleveland says –, but it’s also a neat recognition of Moonbreaker’s tabletop gaming inspiration.

While the main focus of Moonbreaker is its multiplayer battles, Unknown Worlds has built a painting system that lets you customize every figurine in the game. You can take your crew into battle using the stock design created by the team’s artists, or you can repaint them to suit your own sensibilities. I have always loved to paint, so I’m going to make sure my crew will look their best before I send them off to battle.

If you’ve ever tried your hand at model painting, you may have found it’s a great time to put on a podcast or an audiobook. This is where Moonbreaker’s audio dramas can fit in. As each episode will center on the story of a different captain, Cleveland suggests  “Maybe even one day, there’ll be certain miniatures you’ll want to paint while you’re listening to an audio drama because they’re related.” You could work details of their story into the paint job.

Unknown Worlds made this radical break from Subnautica because the underwater survival game wasn’t financially sustainable, Cleveland tells us. You only needed to buy Subnautica once, so there’s a limit to the number of “ongoing transactions” players would make. Moonbreaker may solve this – even if the studio is still working out the payment structure.

As I say, it’s strange to think of a game like Subnautica, which I’ve returned to repeatedly over the eight years since it was first released, as having a “shelf life”, but if that thinking has led Unknown Worlds to build “an experiment” like Moonbreaker, that pulls together a grab bag of hobbies that exploded during the pandemic and wrangle them into a game, then I’m keen to see more.

Unknown Worlds hasn’t let me down yet, so I guess it’s time to dust off my art skills.