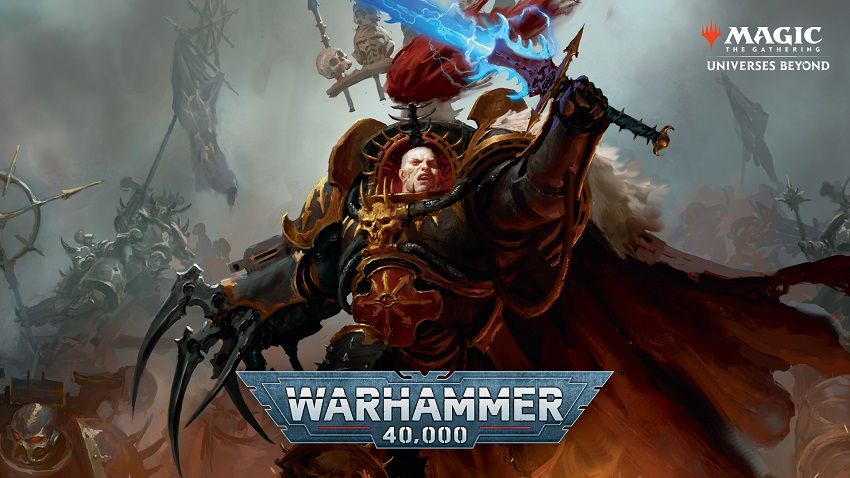 In 2021, Wizards of the Coast announced it would be adding Warhammer 40,000-themed cards to Magic: The Gathering as part of its Universes Beyond expansion series. Which is still a bit mind-blowing, to be honest. More proof this was not a dream comes in the form of a first look at the Warhammer 40,000 collaboration, which gives some details on what form the crossover will take, and shows off a handful of the new cards.

First, there will be four premade 100-card decks for playing Commander, which is Magic’s casual, four-players-around-the-kitchen-table mode. Cards from these decks will also be legal in Legacy and Vintage mode. The four sets are Tyranid Swarm (green/blue/red), Forces of the Imperium (white/blue/black), The Ruinous Powers (blue/black/red), and Necron Dynasties (mono-black).

I’m surprised not to see decks for the eldar or t’au, both of which are pretty popular armies on the tabletop, but glad that at least a couple of them are broadly themed. Forces of the Imperium will include space marines, tech-priests, inquisitors, and presumably some sisters of battle and imperial guard, while the Ruinous Powers deck, which features Abaddon the Despoiler as its Commander, will have chaos space marines, daemons, and other disciples of the dark gods.

As well as the Commander decks, there will be three “secret lair” drops, which are what Wizards of the Coast calls Magic’s limited release small sets, with either alternate art for existing cards (like the current Pride across the Multiverse drop), or a handful of new cards that are a bit out there (like the Walking Dead tie-in cards from back in 2020).

One of the three secret lair drops will contain more Warhammer 40,000 cards, this time themed around the orks. Red and green, I guess? They’d be missing a trick if they didn’t include a Red Ones Go Fasta card. The other two secret lair drops are surprisingly from two of Games Workshop’s other settings: the heavy metal high-fantasy Age of Sigmar and the gridiron-with-goblins sports parody Blood Bowl, though none of those cards have been previewed yet.

The Warhammer x Magic: The Gathering collaboration’s worldwide release is scheduled for August 12, with the secret lair drop running from August 12–22. I reached out to Wizards of the Coast to ask if any of these cards will also be appearing in the game’s digital version, Magic: The Gathering Arena, and unfortunately they’ll be for tabletop only.