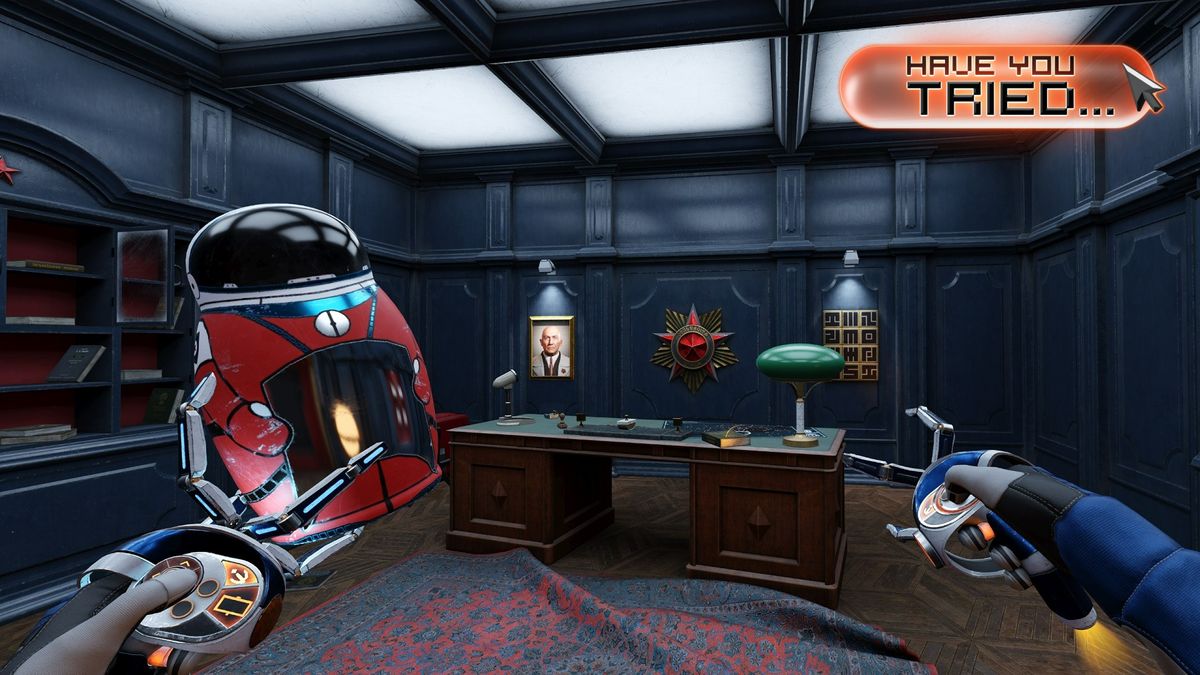 There’s a really satisfying edge to solving Red Matter 2 puzzles that can really feel like your galaxy brain’s kicked in when the penny drops. That’s partly because of how this very slightly Bioshock tinged space adventure uses its VR gameplay to lead you along. Often you’ll see schematics or clipboards that you can pick up and look at to work out how to get some piece of weird space machinery working. If it was a normal game you’d be reading notes or dipping into menus to scan bits of text in a completely boring way – but in Red Matter 2 you’re often standing next to whatever it is you’re trying to solve with the instructions in hand, looking hopefully at anything you can grab up that might help.

It’s a little bewildering at first because the game gives you nothing initially to help, including even guiding you through how any of it works. I definitely threw the ‘this is how you solve it’ clipboard away while investigating at least one puzzle to begin with. However, once you settle into the right groove there’s a satisfyingly tangible feel to working out and solving the puzzles at hand. Instead of looking for prompts and glowing things to interact with, you’re looking at physical clues in the world around you – picking up vital information from computer screens, or realising that a bottle in a cupboard looks exactly like the one on a helpful diagram. There’s an escape room feel to some of the better puzzles here, and one late game challenge got an excited ‘oh my God, WHAT?’ moment when I pieced together something. I’m still strutting around thinking ‘I’m smart‘ days later after that.

All this big braining is happening in a 60’s style Soviet space base, hence that Bioshock call earlier. There’s no genetic powers here, or splicers, but the art design is totally in that sort of area. Story wise I have to admit I’m going to have to be a bit vague here because Red Matter 2 cares precisely not one jot if you’ve played the previous game. There’s a brief opening attempt to introduce some backstory and characters, but it feels like an afterthought – you just get a room with some items on a table you can pick up to have a character go ‘oh that was that guy, remember that guy? Anyway, moving on…’

In many ways the game feels a lot like a film you switched on halfway through if you haven’t played the first one. The red matter, for example, that gives this its name, is never explained and it’s only when it starts doing stuff that you realise ‘Oh, it’s magic space goop‘ – some sort of a nuclear, biologically infectious, spacetime warping, transcendentally cosmic McGuffin driving the Russian, sorry, Volgravian, arms race.

In a galaxy, somewhere

However, while the story treated me like an uninvited guest for not playing the previous  game, I think I actually enjoyed it more without the baggage. As your character talks to a friendly voice in their earpiece, it all slowly falls into place. Bits of dialogue also allude to your imprisonment and escape leaving your memory in a bit of a state, so I suspect that sense of not knowing what is going on is intentional, if poorly communicated.

Prior knowledge of the last game or not, the main thing is having fun solving puzzles and soaking in the atmosphere. This plays the space card well with a few shuttle journeys to take in the stars and at least one dash across a moon gazing up in awe at a giant planet dominating the black sky. There’s some great music too, from a composer that’s clearly inhaled the incidental woodwind widdly bits that go over the transitions in Star Wars. It’s a fairly gentle pace overall, apart from the late stage appearance of a gun, which adds a welcome lift of action and momentum towards the end. I obviously won’t spoil the conclusion but it’s a good sci-fi wrap up to see things off.

Overall, ‘good sci-fi’ sums up Red Matter 2 quite well. It’s a stylised 60s space kitsch adventure that feels a little like one of those theme park rides where people in costumes and theatre majors overenthusiastically pretend it’s all really real. There’s a couple of puzzles I’m still thinking about now, and it hits that ‘oooh’ feeling you want in VR where sometimes just being able to ‘be’ in a place and look around is thrilling enough. It’s a good, jet packing adventure that mixes some nice atmosphere with some practical virtual reality challenges that’s worth checking out if you want to feel smart in space.