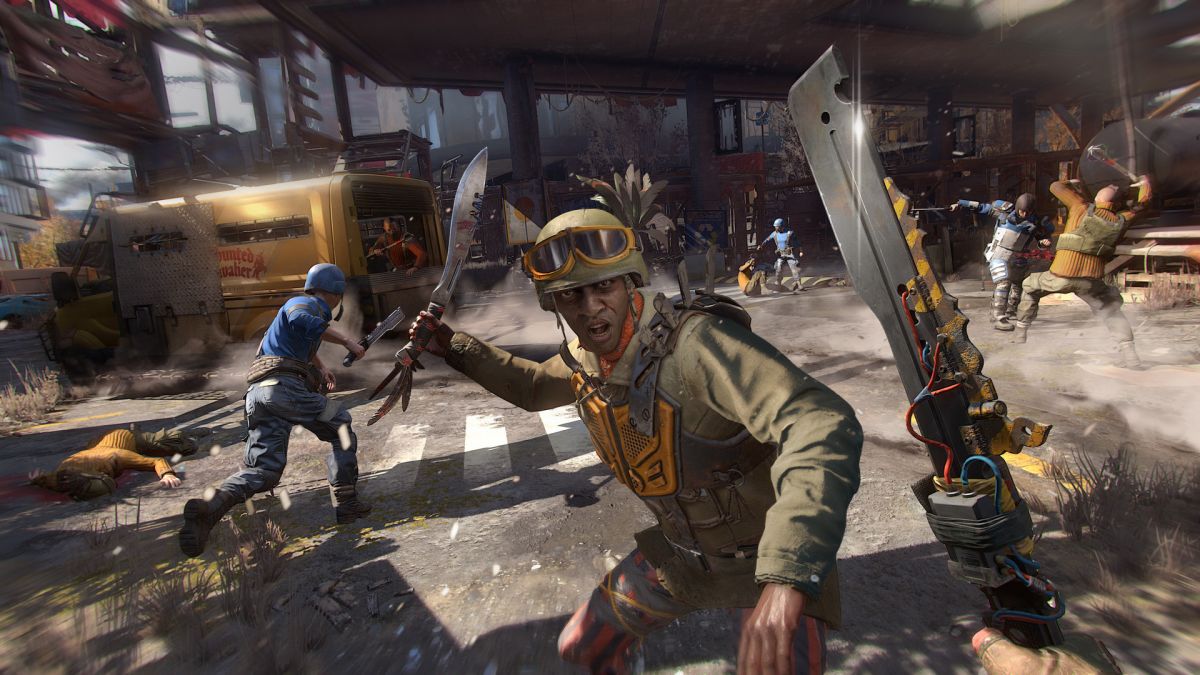 There’s nothing quite like chopping up a zombi- sorry, Infected, with a machete. I’m not quite sure if the glee comes from my recent aversion to (cough) viruses or if it’s simply the satisfaction of lopping the head off of a creature in a hazmat suit. But, it feels cathartic in a way – and considerably better in Dying Light 2: Stay Human than it did in its predecessor.

The Infected attack is arguably unprovoked; I am simply minding my own business, on a side quest that was only meant to see me lighting a memorial candle to pay respects to March Madness (no, not the basketball one), a mission that subtly hints why I am using a machete rather than a gun to knock these creeps back to hell – or wherever they came from. Instead, the quest has taken somewhat of a turn, and I’m now playing detective with the subtlety of a brick as I attempt to get to grips with Dying Light 2’s mechanics during the first half-hour of my 4.5-hour preview session. Does that learning experience involve randomly throwing knives in the direction of Infected? Maybe. Does it require setting the area around me aflame with Molotov cocktails? Definitely. But it is all in the name of gaming science – I swear.

Okay, maybe it is my fault that the Infected caught on to my whereabouts and an angry horde ascended upon my position. But, to be honest, I love it. I hack and slash through each of my tormentors, heads rolling as I aimlessly swing my machete, taking out a few creatures at a time, occasionally vaulting over them to a less enclosed position when things get hairy. I pick up a gas canister and light it. As the fuse sizzles down, I try to aim to where the explosion will have the most impact, then I let go of my makeshift bomb just before it detonates and takes out a herd of Infected. I clamber onto the roof of a nearby deserted bus, taking in the chaotic aftermath with pride and reeling from enjoyment. Now, time to get back to the main quest.

Dying Light 2 has had a rocky development road. Initially announced at E3 2018 and slated for a 2020 release, details on the survival horror sequel were thin for a long time – and for good reason. In early 2020, developer Techland announced that the release date was pushed back indefinitely, with the developer later announcing a December 7 2021 release date. Since then, the Dying Light sequel has been delayed again, with Stay Human now set to release on February 4, 2022.

As a result of these delays, I found myself – a fan of Dying Light – becoming cautious in my anticipation. I thought back to the behind-doors screening of Dying Light 2’s gameplay that I attended at E3 2018 and the pitch Techland had for the sequel to its successful survival horror: more emphasis on parkour combat, choices affecting the narrative, paragliding. Had the developer been too ambitious in its ideas? Probably. But over three years after the presentation, I find myself playing the game that was promised. However, Techland appears to have trimmed the fat since that first demonstration, ditching firearms and unnecessary features such as being able to use a grappling hook to pull items to yourself. It’s a smart move that allowed the developer to create a sequel that, while still ambitious, is now much more streamlined (and visually impressive) than the game I was shown years ago.

Jumping into Dying Light 2 feels like slipping on an old pair of shoes that have been resoled. While the world feels familiar, I need some time to get comfortable in it again after six years away. It doesn’t take long after my bloody detour and soon I get a sense of the parameters. If there’s a ledge, I can probably grab it; if there’s a zipline, I can most certainly zip across it but, if I don’t get my aim right, it’s possible I’ll go plummeting to the ground below – and this happened a fair bit.

Verticality is important in Dying Light 2. You’ll likely spend most of your time atop dilapidated buildings in an effort to avoid the Infected, only venturing to street level when a mission – or some enticing gear – calls for it. Traversal is brilliant fun, when you do it smoothly, and there’s something extremely satisfying about fluidly navigating the rooftops of the vast City where the game is set. Often I find myself stumbling into empty apartments, usually filled with Infected during the day, providing pockets of intrigue between main and side quests. I am compelled to investigate these pockets and side quests further during my preview – apparently, some have rare craft parts – but, aware that time is ticking away, I resolve to come back to them at a later date rather than letting them lure me from my main objective.

And I’m glad I don’t get pulled away by their siren song, because the main questline in Dying Light 2 showcases what the sequel really has to offer. I’m plunked into the story about four or five hours in, after a brief catch-up. Aiden, the story’s protagonist who is on the hunt for his sister Mia, has potentially found a lead on information but, in order to get it, he needs to help some survivors who live in a compound called the Bazaar. Long story short (because I don’t want to spoil things), Aiden ends up presented with a few choices on whether or not he should get knee-deep in the Bazaar residents’ drama with the Peacekeepers or do the bare minimum – with his choices having an impact on how the narrative plays out and, in some cases, will have a noticeable impact on the world. According to Techland, many choices will also factor into your game’s ending.

“There are more than two endings,” Lead Game Designer Tymon Smektała told TechRadar at the Dying Light 2 preview event. “So it’s not like there’s a good ending and a bad ending, but quite a few of them will depend on your choices.”

Following my choice to absolutely get involved in the Bazaar inhabitants’ drama, I ask Smektała whether there is a way to “stay neutral” when it comes to choices like this.

“I wouldn’t say that there is a way for you to be completely neutral, but one thing you can do is to try not to get involved in the conflicts as much,” Smektała told us – whoops. “Because the main narrative is actually not that much about the survivors and the Peacekeepers, it’s about your own quest of finding the sister and uncovering the mystery of what happened to her. Interacting with Peacekeepers and survivors is basically one of the tools you can use to help you reach that outcome. You have to make some choices regarding the factions but, if you don’t interact with them, expect an ending that is a little bit more focused on yourself.”

Dying Light 2 looks to offer an open world I can sink my teeth into. Aside from the various side quests, nooks and crannies I want to explore, there’s plenty else to get stuck into. You can unlock Faction structures to help with navigation efforts and to give you more safe zones, parkour challenges to complete, crafting to play around with as well as modifications and skill tree points to suit your playstyle – plus more we may not have seen. But this content never feels overwhelming, as it can do in some open worlds, and the characters that inhabit the world feel sufficiently fleshed out.

But, as much as Dying Light 2 ticks the right boxes, there are some elements that I don’t click with. The paraglider, while good fun, feels a bit out of place and like a novelty item. In a mission involving Rosario Dawson’s Lawan, when I first get hold of the paraglider, I have to glide across air vents to keep myself afloat. To me, it just doesn’t blend with the modern Dark Ages vibe that Techland is going for – even if it’s useful for traversal.

Another nagging issue is the balance between human and Infected adversaries. The developer says that “night is for the Infected” and “day time is for survivors”, but the emphasis I find – at least during my playtime – is on the survivor enemies. It’s an arguably trivial complaint, but, in a Dying Light game, I want to primarily be fighting Infected – not people. Perhaps this dynamic shifts throughout the rest of the game, but there are times I find myself on the hunt for Infected to kill – though the main questline I played included a pretty cool mission set inside a mostly abandoned department store. I remember being scared to go out at night in Dying Light, but I’m not feeling the same in the sequel – at least not yet.

Playing Dying Light 2, even for a short while, finally put my mind at ease. After finishing my preview session, I wanted to jump back in to explore unvisited buildings and to disappear down the rabbit hole of side quests.

Dying Light 2 will likely please series fans, leaning into the elements that were a treat in the first game, particularly the brutal combat and parkour. But this sequel also shakes things up with its focus on choice and consequence. Techland may not have reinvented the wheel, but it certainly played to the first game’s strengths, allowing Dying Light 2 to feel fresh yet familiar.